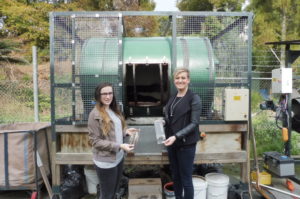 A composting study carried out in 2016 has shown that Econic® bags break down well in non-industrial composting environments.

The 15 week study evaluated the natural breakdown processes of empty Econic bags in comparison with regular plastic control bags. The Econic and control bags were placed in a rotating composter, based at the University of Waikato in Hamilton, New Zealand, and were monitored weekly to compare their degradation. The empty bags were covered with compost made from grass clippings, green waste and sheep manure pellets.

The study results demonstrated that Econic bags break down well in a composting environment, similar to those typically used by a home or small business. The monitoring report noted that the Econic bags were, “fragmented and delicate after 15 weeks, and the slightest touch caused what was left of the top two layers to fall off the bag.” In comparison, the control showed no significant changes in appearance after 15 weeks, apart from a slight discolouration of the outer layer.

Convex Technical Manager Andrew Sheerin says, “The study shows that Econic is a good option for helping businesses and consumers reduce the amount plastic waste going to landfill, and thereby protect the environment.”

Econic is made by Convex from two or three compostable films derived from sustainably-managed renewable sources. Each film has been internationally certified to the EN13432 standard and the American testing standard ASTM6400.